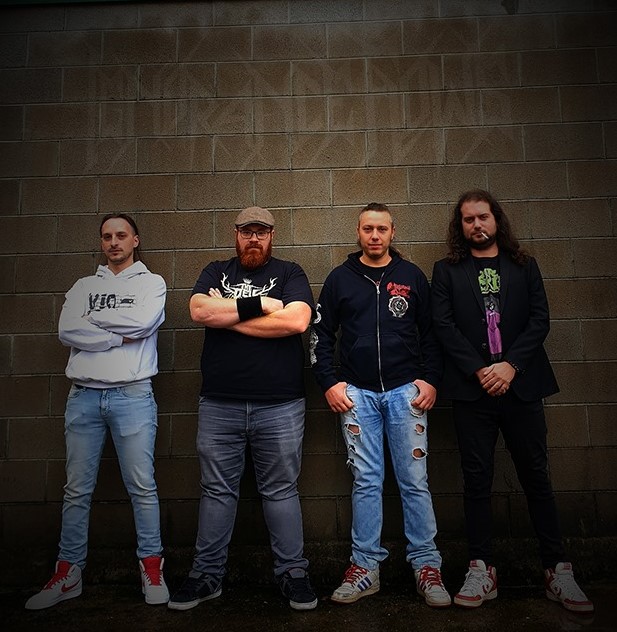 BIO:
The band was formed in late November, 2014 by colleagues Ema (Guitar), Giuse (Bass), Rino (Drums) and Angelo (Guitar) along with common friend Andrea as lead vocalist.
The first purpose was just to have some fun after work, but the common love for old school thrash metal made something more serious happen.
The aim was to re-create a really old school kind of thrash, diluted in years with a lot of influences.
The band rehearsed its first song called “Last Act of Violence” and a few riffs for a couple of future songs.
After a year Angelo left the band for personal reasons. All the tracks were arranged for one guitar and the band completed 3 new songs.
Unfortunately Andrea was diagnosed with cancer, so he was forced to stop every activity with the band.
Fra (Rawfoil) accepted the challenge and became the new lead vocalist.
Also Rino decided to leave the band, continuing only the necessary time to find a new drummer.
In early 2016, the band’s activity was in danger due to Andrea’s death.
The difficulties to face the situation and the sorrow for the loss were solved by the positive answer by Thrasher (drums, ex-Torment), so a new Ignorance Flows era started.
With a new solid line-up, in few months the band grow up and new songs were completed. In January 2017, it was time to hit the stage for the first time.
After a year, the band was ready to record its first album, entitled “Rotten Riot”. Recording sessions started in late February, 2018 at Toxic Basement Studio.
The first full length is now ready, out in September 2018 for DeathStorm Records!

IN LOVING MEMORY OF GIUSEPPE CAMPANARI